Having watch the Ask A Mortician YouTube channel for a number of years now, coming across The Undertaker’s Daughter by Kate Mayfield had me intrigued. A memoir about growing up in a funeral home in the south of the US, that’s an area I’m not familiar with and so I decided to pick the book up. 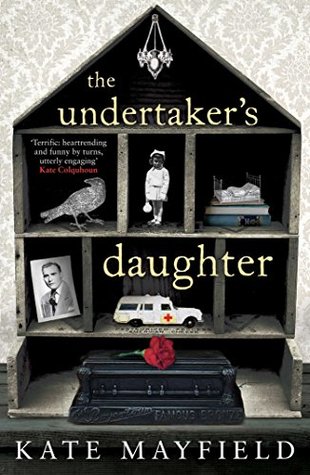 We follow Kate all throughout her childhood, starting from around the age of 6 and progressing up into her later teenage years and her desire to escape from this small town and the gossip that was prevalent within it. I don’t know if it was intentional but this town was written exactly to the stereotype that I’ve always been shown about the southern US. It was filled with gossip-mongers, the status-quo was never to be breached and there were so SO many blatant racists. And as always those who were raised by the Black nannies/maids etc are confused about why everyone is being racist. I’m never quite sure how to read these, as it feels a little self-congratulatory but at the same time if that’s how they experienced their life who am I to judge? It’s a little complicated. I’ll leave it up to you to decide.

We do get some really interesting insights into how the funeral business did run and how the common burial practices of the US came to be, adding to the knowledge I had already gained.

If you’re interested in the southern US in the 70s and in funeral homes/undertaking etc then this is the book for you. It’ll show you a lot about the cultural mindset of the time as well as informing you how funeral homes were run. If this isn’t your interest, however, I wouldn’t recommend picking this up. It’s not the most universal of reads.