Are Prisons Obsolete by Angela Y. Davis is a work which introduces the idea of a prison-less society to the reader and discusses how prisons came about as well as how the world would work without them. As a white Brit who has never come fowl of the police, I’ve not had much cause to think about the prison system, both here and in the US. I have thought about and had discussions on the unfair treatment in US prisons and the abuse that female prisoners go through. But I had never actually entertained the idea of abolishing prisons all together. 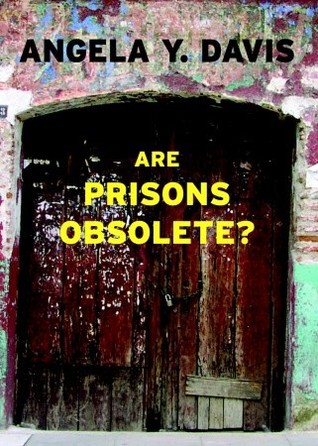 That way of thinking, obviously, comes from a place of privilege, and so I’m very grateful to Davis for opening the doors to this topic and blowing away the cobwebs to reveal truths that I knew but had not actioned.

In terms of the writing style, Angela Davis has walked the fine line between academic and accessible. This does indeed feel like an academic text whilst you’re reading it, however, the words used are not inaccessible and I believe most people would have no issues with reading this work.

This book does, of course given that the author is American, focus on US prisons. There are, however, mentions of prison systems around the world and she also talks about how the European system of justice came to be almost worldwide (hint: colonialism). The personal factors, thought, remain universal no matter where you are. We are so used, as a society, to prison being the de facto punishment for those who committed any crime that we cannot imagine how our justice system would work without it. It was only relatively recently, however, that the prison system came into widespread use and the United States worked its not-so-great magic and turned the system into a capitalists wet dream.

The author, armed to the teeth with evidence from history, interviews, research and her own personal stories, teaches the reader about the damage that the prison system causes and how in the US (and likely many other Western countries) Black and other ethnic minority individuals are much more likely to end up in jail despite making up a smaller amount of the countries population. This is not because these people are committing more crime but because these communities are targeted unjustly due to racist discrimination by the officers maintaining the law. There is also the issue that in the US many laws were created purely to target Black populations after the demolishment of slavery. The white plantation owners weren’t going to give up their free labour and superiority so easily.

Life whilst inside prison has its own horror stories for both men and women, with the absolute power held over them weaponised to the guards advantage. The lack of access to facilities that could allow these people to improve their lives, to educate themselves, to gain more skills. This isn’t an accident. It’s by design.

All this and more is covered in a 128 book, this really does seem to be a great starting point for those learning about the anti-prison/prison abolishment movement. As mentioned at the start of this review I am new to this movement as well, so I cannot speak to how well this text compares to others. It has, however, opened my eyes to the corrupt systems in place and I definitely want to learn more about the prison systems in my own country. Non-US countries like to pride themselves on “not being as bad as the US”. I need to read more to discern if this is even true, and also if it’s true to any important extent. Just because it’s “not as bad” doesn’t mean it’s good.

I gave this book 4/5 stars as I did struggle to read it a little, but I was pushing myself to finish it in one day rather than reading at a natural pace. I really do recommend this book to anyone unfamiliar or just starting to learn about anti-prison sentiments. It’s an eye opener that will lead you to further information whilst providing what I currently believe to be a good basis to learn from.

One thought on “Do we need prisons?”