I went on an AB Endacott binge in a pretty short period of time! Next up is The Ruthless Land which is the first book I’ve read from Alice that isn’t set within the Second Country and that has a different narrator. Although I’m sad to be leaving Elen-ai and Gidyon behind I have loved exploring more places within this beautifully written world. 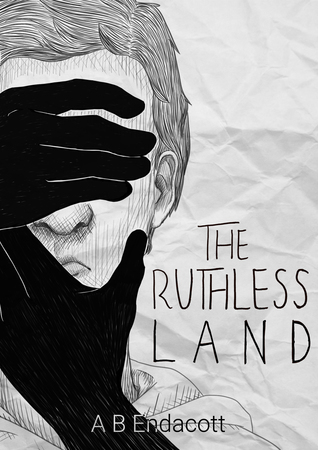 Within The Ruthless Land, set in the Fourth Country, we follow Lexana as she is sent to the Academy atop a mountain, and filled with monks, in order to learn and develop knowledge that will be useful in running her family’s business that she is the heiress to. While there she starts to connect with Jaxen, one of the teachers in the Academy. When the worst happens in regards to her family, Lexa must leave to find her family and escapes down the mountainside and begins to make her way across the Fourth Country with Jaxen’s help.

Parallels can be drawn between the Fourth Country and countries with mandated face coverings for some of the population. Unlike most countries in real life, where women are the ones made to cover themselves, the Fourth Country insists that men cover themselves, showing that men have a lower status in society here similarly to in the Second Country. This was explored in such an interesting manner by Alice and I really loved the conversations she brought up about it.

Watching Lexa and Jaxen make their way across the Fourth Country avoiding bandits and roaming gangs, as well as keeping Lexa’s identity under wraps so that those who would be hunting her don’t find and kill her, was so engrossing and I found myself speeding through this book. I was so invested in all of the characters and their relationships and the only negative I can say is that I wish I had gotten to learn more about the Academy and the monks and teachers that lived there.

The book is set after the events of the Queendom duology and I love the links that Alice made between the two, one character in particular appears in both books and I was really surprised when I came to love her in this book! I love the different viewpoints that Alice has managed to show of this person and their role in the world. This can be read completely as a standalone book set in the Godkissed Continent (the same continent as Queendom) so don’t worry about that, and I absolutely recommend picking it up, along with everything else Alice has published! She is one of my absolute favourite authors (and a lovely person to boot!).

4 thoughts on “Exploring the Fourth Country”