The Complete Poems of Robert Burns is not a small book, clocking in at 600 pages. This contains almost, if not all, of the poems and songs he wrote throughout his life. Burns is a celebrated Scottish poet, with Burns Night being observed by Scots around the world on the poets birthday, the 25th January.

I’ve wanted to read Burns’ poetry for many years now, so I was excited to dive into this collection. There are some absolutely beautiful poems here, I’ll list my favourites further down, but this also seems to be just a collection of everything so there are some that aren’t as engaging.

If you’re coming into this as someone with little to no knowledge of Scots, there is a glossary in the back that’ll help you with the words you don’t know. But you will still struggle with some of the poems because the rhyming is in Scots. The English pronunciation of the words don’t rhyme, but with the Scots accent they do. For an English person I’m pretty decent with Scots, but I’d have to double back and reread the words in the Scots accent to get the rhyme to work. If you’re totally unfamiliar with Scottish accents it could be worth listening to someone Scottish read a few of these poems out loud, I’m sure there’s videos on YouTube.

Here are the poems that I enjoyed the most, they vary in theme from mourning, to nature, to political themes:

The Death and Dying Words of Poor Mailie, To A Mouse, Lament of Mary Queen of Scots, Winter, The Inventory, Elegy on the Year 1788, On the Birth of a Posthumous Child, The Selkirk Grace, Line Written on a Banknote, Auld Lang Syne, The Highland Widow’s Lament.

I didn’t rate this collection on CAWPILE, because it doesn’t fit into the categories there. However, I’ve rated this collection as a 3*. There are some wonderful poems like the ones I mentioned above, but there are also a fair few that I didn’t enjoy or just found neutral that brought the rating down to a respectable 3.

This is a really interesting collection, and I definitely think that Burns is a poet worth checking out. I don’t know if this 600 page bind up is for everyone but I’m glad I’ve read it. Have you read any of Burns poems? What did you think of them?

This is a YA book which has been quite hyped online, and because of that I had avoided it for a while. Also because contemporary isn’t really my thing. But in the end I picked it up, in audiobook format, and damn am I glad I did. 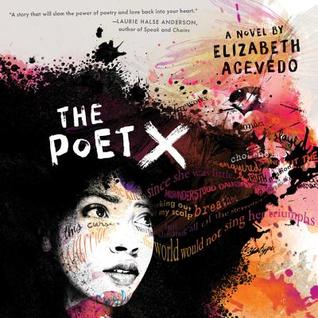 The Poet X is a powerful book, written in poetry and the audio is narrated by Elizabeth Acevedo herself. I felt my own teenage years within this, it was so raw and powerful and relate-able. Our Afro-Latina main character has had such a different life to my white British self, with such different struggles, different goals and aims. Yet here I was, on the bus home, tears streaming down my face.

This is definitely a book where you should listen to the audio. As it’s written in verse, having Acevedo read it out to you in the way she intended is powerful and it makes Xiomara’s slam poetry feel even more intense and raw.

I one million percent recommend listening to this amazing book. I’m so glad that I randomly picked this up and I definitely need to read more from Elizabeth Acevedo in the future.

Sunshine by Melissa Lee-Houghton is the second poetry book I picked up secondhand from my local charity shop, purely because I wanted to read some more poetry.

Abuse, addiction and mental health are all topics present in this book, so be warned if those things are triggering to you. The poems can be quite dark at moments, but there are also many pieces which focus on brighter sides of life. Essentially, this collection encompasses the human life and the roller coaster which we all travel on.

This collection may be a little dark for some, but personally it was really nice to indulge in those darker thoughts and allow them to surface for a time and wade in them, as they are normally shoved down deep. This is something I think is good for many, to evaluate all thoughts which you have.

I’m glad that I picked this one up, and if I spot any more from this author I’ll pick it up in the future.

Who Is Mary Sue? by Sophie Collins looks at the archetype of the perfect female often portrayed in media and how unrealistic this woman is within the real world. Another interpretation of a Mary Sue is when a woman writes out a character whom certain readers believe to be them simply trying to reinvent themselves within this fictional world. I picked this book up from my local British Heart Foundation charity shop as they’ve finally started selling poetry books!!

I liked the concept of this collection, however, I didn’t really connect with any of the individual poetry pieces which was a real shame. The poems all seemed very impersonal and non-connective with no real links making me feel like I can feel the authors emotions.

However, it is a very quick read and for this reason I suggest picking it up if the concept calls to you. Poetry is such a subjective art and can be interpreted so differently by the most similar of people, so I always feel that if the subject matter is of interest the poetry should be experienced first hand.

Let me know if you’ve read this collection or if you feel the same way about poetry being so personal and subjective!

“She never stops complaining” I hear them all say.

The hurt I can’t express, the pain, the emptiness.

The medication helps. It makes me “normal”. But “normal” is numb. “Normal” feels nothing.

Normal has no reason to do anything. She is empty. No pain, but no joy.

It took my lows, but captured my highs for itself. Took them where no one could see.

I try to recapture the old me, surely feeling something is better than nothing.

I whine, I complain, I turn everything negative.

I can’t bring her back.

I don’t want the soul crushing pain, the wish for it all to end.

I don’t want to hate every inch of my skin, my thoughts, my being.

I just want to feel…

This book is a collection of poems chosen for children aged five to fifteen although people both older and younger than this can still enjoy the poems. It is still one of my favourite books to read when I only have a little time.

It includes poems such as “On The Ning Nang Nong”, “Extremely Naughty Children” and “On A Portrait Of A Deaf Man” which range from childish and funny to mature and thought provoking. This is a book a child could grow up with as they mature themselves and come to understand the poems more.

The poems themselves were picked by children to go in the anthology and have comments by some of the children who selected them at the end. This can provide another view on the poem and can highlight portions which were missed in the initial reading, as well as showing what children really pick up on throughout the poems.

Recommended for:
Young children, any child or teen struggling to get in to reading or anyone who loves poetry.
This will be a book which the child can grow up with and treasure. It may help those struggling to read, either with the practicalities or lack of interest, as the poems are a lot shorter than novels and may grasp their interest more as well as having simple language in the section for younger children making it easier for them to understand. It is also good for anyone who has a love of poems as it will be a lovely addition to their collection as well as being a reminder of some of their favourite childhood poems.

Age recommendation:
Any age.
Anyone who can read will enjoy this collection of funny and thoughtful poems.